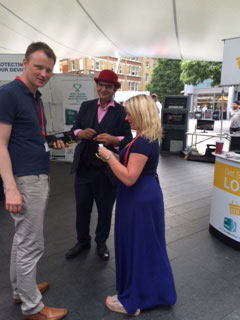 While I do a lot of parties, weddings and events what people often do not realise is that I also perform magic with a message.

So it was that I was asked to help the City of London Police roadshow promote the “Keep Safe Online” message to people wandering the streets in the city of London on a three day event.

I asked them to write their names and dates of birth on a banknote and asked them if they had this information and other information on public media such as Facebook and pointed out that this information is used by banks to confirm their identity and that people could steal their money…..as I had…..their signed note had gone, replaced by a piece of paper (this caused a certain amount of consternation).

I pointed out that online carelessness was like burning money, and the paper vanished in a ball of fire…..replaced by an egg.  They promised to be careful with their online activities and to protect their nest egg……and inside the egg…..was their signed banknote.

What Did They Say?

“Danny’s magic with a message was fun and effective. He was great to work with, completely flexible and willing to adapt to our needs”  Detective Inspector Katie Balls.

« A Party In France
Party at The Cavalry and Guards Club, Mayfair »